Isabel Star Hagan wants to become a film director. The Noe Middle School 6th grader learned how to make movies in front of a green screen and helped produce a series of YouTube videos not in extracurricular film classes, but last year, while she was a 5th grader at Field Elementary School in Crescent Hill. Film-making is not part of Field’s curriculum, per se, but the after-school program STLP, where Isabel learned to hone her filming-making skills is a component of Field.

The concept is simple: Students observe a need in their school or community and utilize technology to develop and implement a solution. The formal name for this is Student Technology Leadership Program (STLP), and since 1994 The Kentucky Department of Education’s Student Technology Leadership Program has tapped into students’ interest and challenged them to explore new ways of learning, helping their schools and communities in return.

For example, one of Isabel’s STLP team’s projects was the “Makers Making Makers” fundraiser to help build the children of St. Josephs Children’s Home a maker space. Students created 3D keychains, ornaments and backpack tags to sell. A student-produced series of YouTube videos showed how to use the 3D printer and other resource materials for the printer.

“My favorite part about Field’s STLP was that we got to make movies in front of a green screen,” says Isabel. “In the future, I will be prepared to work on making movies thanks to STLP.”

The real impetus behind “Makers Making Makers” was students wanting to do something for the St. Joseph students that attend their school. “The STLP students wanted the St. Joe’s children to have the same opportunities that they have. Our students found out the children loved art and to create things. So, the idea was to give the students another creative outlet using art and technology,” says Kevin Knochenmus, Family Resource Coordinator/STLP Coordinator, Field Elementary.

“Tech Clubs” give all students the opportunity to learn about technology. “Some students do not have transportation to stay after school, so we decided to start tech clubs in the morning before school,” Knochenmus says. Tech Clubs served more than 150 students.

Field is just one of the registered JCPS STLP clubs with KDE. In 2015, 17 Jefferson County Public Schools provided STLP programs. By 2016, that number grew to 46. In 2017, the number of JCPS schools with STLP programs jumped to 79 and continues to grow.

Located on Southern Parkway in the Iroquois neighborhood, Olmsted Academy South (OAS) Middle School’s STLP officially meets once a week after school, but according to Alvin Flowers, Engineering/Computer Technology Teacher/STLP Coordinator, most of the 35 active students work on their projects daily after school through in-person and virtual meetings.

“Women in Technology” addressed the lack of women working in technology fields and the pay gap between men and women working in the field. To bring awareness and expose more females to technology careers, students worked with elementary school students in the district and introduced them to coding games and other technologies on a regular basis.

“Luxury vs. Necessity” aimed to help impoverished students at OAS. The plan was to fundraise, raise awareness, and host clothing drives. Students started a cooking club after school to show students how to inexpensively make healthy and nutritious meals. For diversity, students planned to have different teachers from different cultures provide recipes.

“Won’t You Listen” was about bringing awareness to mental illnesses and eliminating the myths and stigmas associated with it. Some group members were impacted by mental illness, through personal and family member’s situations, and didn’t readily have anyone to talk to or alternative ways to deal with it. The student’s goals were to educate the public and encourage those dealing with mental illness to get help and to realize that they are not alone.

The strength of STLP, believes Flowers, is that it uses project-based learning principles to empower student learning and achievement through the utilization (and creation) of technology.

Auburndale Elementary
Auburndale Elementary’s STLP launched last year. Their “Care for Animals” project grew organically. “I told the students at the beginning that the idea around STLP is to find a problem in the community and world that we could help,” says Ryan Shetler, Computer Teacher/ STLP Coordinator. “They came up with ideas ranging from clean water in Africa to homelessness in Louisville. We talked about several ideas and how we could measure progress in any of these areas.”

Students emailed Shetler ideas, and he noticed a consistent theme: animals. Shetler invited the Kentucky Humane Society to meet and brainstorm ideas with the students. The importance of microchipping and the need for people to foster pets came out of those conversations. The students scripted, filmed and edited videos based on those topics.

“We don’t just want to increase the amount of fostering and microchipping that goes on at our school; we want to encourage everyone to do it,” says Shetler. “Louisville pet owners will benefit from not losing a microchipped pet. It also brings awareness to those people who don’t have pets that if they find one they know how to see if it’s microchipped and where to take it. Families also benefit from fostering a pet by taking care of it and giving children time to see if they are ready to take on a full-time pet.”

Other results of the program include: student-made posters about fostering and microchipping, and a monthly school newspaper called “Paws on Paper.” Each edition has a section on what is going on in STLP and how to take care of your pet.

Further, The Humane Society benefited from the collaboration. “They had 1,000 flash drives that they needed one file taken off of and a new file added. So, the 3rd-5th graders took on that job, saving the Humane Society money by having to pay someone to do it,” says Shetler.

The hard work of these students pays off in the community and in competition. School teams are encouraged to enter their projects in STLP competitions. More than 500 JCPS students and 100 JCPS volunteers represented 25 JCPS schools at last year’s State Championship STLP Competition. JCPS won approximately 20 awards at the State level.

Middle and high school students who don’t have STLP programs in their schools can participate through the district. In addition to participating in the showcase projects, students could interview to participate in one of the Service Teams at the State Championship. The service teams include STLP Junior Engineers, Live Reporters, Media Arts Team, Production Company, Scratch Ambassadors and Social Media Team.

Vidhi Desai from Eastern High School, was selected as a Social Media Service Team Member. “I was in STLP in middle school at Meyzeek [Meyzeek Middle School], and that was a great experience for me so I decided to join it again but try a different route,” says Desai. “I wanted to be challenged and step out of my comfort zone.”

As a Social Media Service Team Member, Desai attended the state competition and sent out tweets and Facebook messages for at-home viewers about everything from students’ views on their projects to how they think the competition went.

“I got the opportunity to meet and gather everyone’s viewpoint about what their project was about, and how they dealt with their challenges,” she says.

It was Desai’s favorite part of STLP—that and seeing and meeting people from all-over Kentucky participate in various categories.

“Being able to be on the Social Media Service Team was an honor,” she says. “I was lucky to get picked from all over the district and Louisville. It was a once-in-a-lifetime opportunity.” 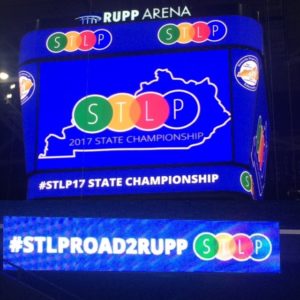 STLP gives students a chance to get involved in their school and surrounding community, while also learning about new technology. It provides an accessible way to learn about real-world project, while highlighting the creative, logical, and entrepreneurial talents of local students.

“We’re building positive community relationships, a positive school environment and providing growth in communication skills and self-esteem. The STLP program opens up avenues that were not available to students. I can honestly say the STLP program at Field Elementary, has changed the perception of our students in a positive way,” says Knockenmus.

For Angela Stallings Hagan, it only further validated her daughter, Isabel’s, long-proclaimed desire to be a filmmaker. “STLP helped her sharpen her skills in planning and executing a project. It challenged her to learn new technologies that might be intimidating until you try,” she says.

Not to mention, STLP opens up a new world of creativity.

The Regional STLP Showcase will be held at UofL on November 17, 2017. Schools have until October 20 to register. For more information, visit jcps.me/stlp.