A stroll through the aisles of Mor’s African Market might just make you feel like you’ve left Louisville. At the same time, it could also help you realize how many worlds peacefully co-exist within the River City’s confines.

The store’s located at 3927 Bardstown Road, in the Buechel part of town. It’s an area with a high concentration of West African immigrants. The store’s shelves and coolers reflect this, featuring items you might not see at the local Kroger. Like cow skin for example or varieties of dried fish. Could I interest you in a non-alcoholic malt beverage or mango nectar? You get the idea.

When I visited, Momath Sall stood behind the counter, like every day. The Senegalese immigrant works seven days a week, from 10 a.m. to 9 p.m. He co-owns the store with his wife, Kadiatu Jollah. She also runs and cooks the food for Maa Sha-Allah, a restaurant inside the grocery.

Sall moved to Louisville in 1999 from New York City, one year after Jollah. They married that year and have four children.

Sall follows the news, and is quite aware of the anti-immigrant sentiment that’s seeped into the national conversation. But he hasn’t felt its sting. “Most people I meet are open to the immigrant community,” he says. “Of course I watch the news and know everything that’s going on. There are people here that are not welcoming, but I personally haven’t had any bad experiences that are out of the norm.”

He says Louisville has by contrast welcomed him and Jollah. Jewish Family & Career Services helped them with paperwork when opening the business, and they received a loan through the microbusiness program offered by The Louisville Metro Department of Community Services. “I would say generally this city is very helpful,” he says.

Jollah has her own dramatic story, and was the focus of a 2011 segment on WFPL. The short version is that she left Sierra Leone during its civil war and migrated to the Gambia. From there she emigrated to New York City and eventually Louisville. Unfortunately, she had to leave her two children in the Gambia, and it would be nearly 18 years until they reunited.

To earn money, she cooked African style meals at her home and would sell them to taxi drivers at Louisville International Airport. Her loyal patrons included drivers from West Africa, the Middle East, Haiti and America. The demand for her food grew, and she started to sell it at the now-closed African Millennium Market. In time, she opened the restaurant in the store.

Sall says Jollah’s food brings in a diverse array of Louisville residents, not just people from that immediate area. 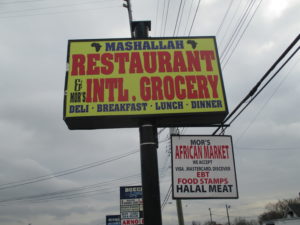 One fan is Jarett Duker. Duker was the former director of the non-profit Navigate Enterprise Center, which connects small businesses with financing and provides business coaching and training. It is also a part of JFCS.

“I love bringing people here,” he says. “One, because the food is amazing. And it’s just a really great example of how immigrant businesses can come into a community and become staples.”

Navigate worked with Sall and Jollah in a few capacities, Duker says. Navigate provided counseling and education assistance. Navigate also facilitated the connection between Sall and Community Services in 2014.

Duker didn’t add specifics on Sall and Jollah’s loan but says that Metro-sponsored loans typically range from $500 to $15,000, with many in the $5,000 area. He also says such loans typically have interest rates that hover between 7.5 percent to 9.9 percent; higher than the average mortgage, but cheaper than the majority of other small business financing options. For example, Kabbage.com has business loans with interest rates that range from 14 percent to 35 percent.

Navigate also worked with Sall and Jollah to make the store more customer friendly. In one instance, they recommended that the shelves be set up in a way more typical of a Western convenience store. The store’s goods had been along the walls, a more African style, Duker says.

Dave is the winner of multiple Moth Storyslams, an award-winning journalist, and past Deputy Editor at Forbes.com, and reporter at Forbes magazine. He’s written for: NPR’s On the Media, public radio’s Marketplace, WFPL, Playboy, CNBC.com, The New York Times: Upfront, The New York Post, The Financialist.com, Louisville magazine, The Forward, Time Out New York, New York magazine, The New York Press, and many other publications. He also produced the NYC-based storytelling show “Storytime” for two years.
SHARE ON FACEBOOK
SHARE ON TWITTER
EMAIL TO A FRIEND