Be it a milestone birthday, a co-worker’s promotion, a nonprofit fundraiser; or maybe no reason at all except for an excuse to get friends together to celebrate being together, Downtown Louisville offers a slew of event spaces. Check out our selection below for seven of the coolest event spaces within Downtown’s corridor. 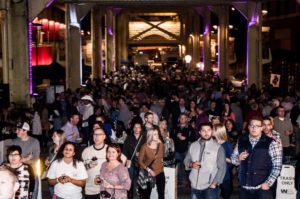 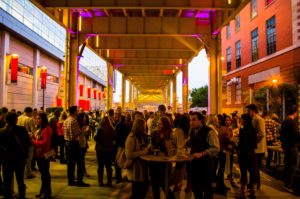 Under the Bridge Downtown

For the ultimate urban outdoor venue space go outside and under, yes under, the Clark Memorial Bridge (Second Street bridge streetscape at S. 2nd Street). Sure, you need the proper permits. But, don’t let that discourage you. Instead, imagine the possibilities of renting out the three-block area from Main Street to River Road directly underneath the Clark Memorial Bridge (adjacent to the Yum! Center).

Wondering what type of events fit under a bridge? Louisville nonprofit Cure CF, Inc. hosted and will be hosting CRAFT Louisville, a pizza and beer festival fundraiser for cystic fibrosis on Oct.7, and The Flutag Block party also set-up shop under the bridge last year. 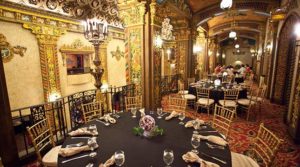 625 S 4th St
Only at the Louisville Palace could My Morning Jacket perform to a sold-out crowd one night, and your sister’s son dances the Hora at his bar mitzvah at the same place the next night.

The Louisville Palace is known for stellar acoustics and concerts, but also for private events serving groups as small as 100 and as large as 2,700.

If sharing the same stage as Prince once did isn’t enticing enough, consider the history of the building with its beautiful architectural details. The Louisville Palace was built in 1927 and designed by theatre architect John Eberson. Painted frescos, ornate sculptures and a Spanish Baroque-themed lobby and grand foyer complete with arcades, balconies, and turrets decorate the venue. The interior theatre ceiling looks like a night sky complete with twinkling lights shining like all the Palace star performers past and future. 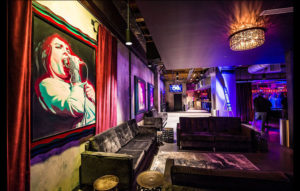 611 S. Fourth St.
Steps away from The Louisville Palace is its younger sister, the Mercury Ballroom. The former Wright & Taylor Building, underwent an impressive renovation that redesigned the two-level, 16,000-square-feet venue into a one-of-kind rock royalty motif with the likes of Bryson Tiller, Sturgill Simpson, and Fitz & The Tantrums, to name a few, who have performed.

Special event options at the Mercury Ballroom include pre-or post-show dinners or parties after concerts. Budget permitting, staff can help you book party entertainment. Past parties have included performances by fire spinners, live karaoke bands, aerialist, and even a guest performance by Cheap Trick (In that case, the party planner knew the band).

For a completely immersive art experience 21C Museum Hotel isn’t just the South’s original art museum and hotel, but a unique event space, which can accommodate parties from 10 to 450.

Surround guests with thought-provoking, contemporary art, artisanal cocktails, and catering from the Proof on Main culinary team, and you’ll be sure to get guests talking.

21C Museum Hotel offers private dining rooms, atriums, and a rooftop apartment with more than 3,500 square feet of indoor and outdoor space and views of downtown.

Don’t forget about the penguins. You never know when and where these VIP mascots will make an appearance.

View From the Top

8UP: Elevated Drinkery and Kitchen

When 8UP: Elevated Drinkery and Kitchen opened in 2016, it quickly became the go-to place, due to its spectacular rooftop views of the city atop the eighth floor of the Hilton Garden Inn. Picture fire tables, floating bar, and a large expanse of glass rail overlooking 4th Street Live that provides an obstructed view of Downtown. In addition to hosting an event atop the rooftop bar, 8UP also offers private or semi-private party spaces for events and gatherings that should not be dismissed. For example, the “Boardroom” features glass retractable walls. Interior bar lounges provide comfy, customizable seating and contemporary decor. Another 8UP perk: Park in the Hilton Garden Inn garage and the private 8Up elevator takes guests directly to the party. 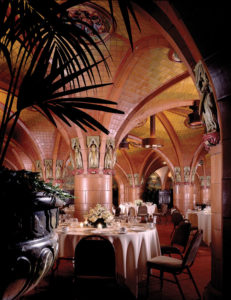 If Tiles Could Talk

500 South 4th Street
What’s cooler than hosting an event at a favorite spot of both Al Capone and F. Scott Fitzgerald? At the Rathskeller, a 1907 addition to the Seelbach Hilton, you can. Just head down to the lower level of the hotel through the clandestine doorways, and you’ve reached an entirely unique room offering 4,200 square feet of space in a medieval setting. It is the only surviving room in the world completely encrusted in handmade Rookwood pottery, made by the famous Rookwood Pottery Company of Cincinnati.

Fifty to 150 guests may dine under the red-tinted, terra-cotta ceiling, and gaze up at Rookwood-Pottery pelicans — a sign of good luck. Tile designs depict walled cities in the Rhenish region of Germany, where the hotel’s founders, Otto and Louis Seelbach, were born. Coming from German, the term “Rathskeller,” means “council’s cellar” and is a common name in German-speaking countries that refers to a bar or restaurant located in the basement of a city hall.

The Rathskeller definitely takes visitors back in time. If these walls could talk, there’s no telling what stories the tiles of the Rathskeller would share.

Suitable for the Bard

Actors Theatre Louisville’s is the city’s top performing arts theaters and home of the Humana Festival of New American Plays. When it’s not paying tribute to the Bard or the next big playwright it serves as an original event venue. Think a seated dinner for 150 in the lobby or a seminar for 600 in the theatre.

Indoor, outdoor, underground, under bridges or even on rooftops—Downtown has no shortage of impressive, out-of-the-box venues for any type of event.