The door had barely closed behind me when I received Oleg Gold’s warm welcome. “Would you like tea or coffee?” he asked, smiling as he ushered me into his compact and vibrant market.

Two glass cases flank the left side of the shop, filled generously with cured meats, cheeses, whole smoked fish, and golden tins of caviar. Four short aisles stretch along the right side of the store, an enticing array of packaged goods decorating the shelves. Any spare space is filled with an assortment of everyday sundries, from newspapers and greeting cards written in Russian, to first aid items in Russian language packaging. There is much to take in, and I am instantly eager to be spirited away by this treasure trove of goods from across the globe.

Gold sets me up with a drink the shade of a brilliant green, an all-natural soda direct from Russia infused with an herb that he isn’t  even sure has an English name. I sip and nibble on Turkish tea crackers as Gold shares the story of how he came to own this shop with Arina Safarova, whom he met a few years after arriving in Louisville. 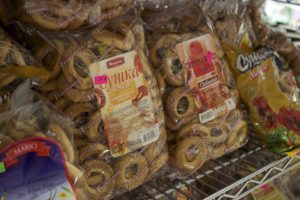 From Moscow to Louisville

Gold’s life began in Moscow, and he found himself in Louisville by way of Austria, Germany, and Italy. He secured a sponsor to help him immigrate to America in 1989 and, save a four-month stint in New York City —“it was too much” he shares—has been a Louisville resident ever since.

In the late ’90’s the Russian population in Louisville was growing at a steady pace, particularly in the Buechel area. The Jewish Community Center was actively assisting in the resettlement of individuals making their way to America from Russia and the eastern edge of Europe.

Without cars, the need for a grocery store within walking distance that sold items of some familiarity became quickly apparent. Safarova and Gold decided to take a risk and opened Golden Key in 1997.

“There’s the boss” announces Gold as Safarova enters the store, her smile bright against her raven hair.

Safarova immigrated to America in 1991. Born in Azerbaijan, she and her family were forced to migrate west to Armenia. They came to Bowling Green as refugees and have called Kentucky home ever since.

Safarova takes me on a tour of the aisles, pointing out a number of specialty items including an impressive collection of canned fish and a donut-shaped, cracker-like snack from Russia. “It is so popular” laughs Safarova.

We walk past a freezer stocked with bags of frozen pierogi and a small assortment of Kosher and Halal goods. Safarova takes the charge when it comes to stocking the store and allows her customers to guide her.

A Taste of Home

The majority of the Russian population has moved away from Buechel over the past 20 years, settling along the eastern edge of the city, however, they do not hesitate to make the drive to Golden Key on a regular basis. Golden Key’s customer base has continued to grow and diversify over time. Louisvillian’s from Bosnia, Turkey, Ukraine, and throughout the Middle East count on Golden Key for a taste of home.

“Customers will send me emails with photos of food they miss from their homeland,” says Safarova, who is happy to bring these wishes to life in Louisville and has taken on a business model that allows for a large amount of variety but in smaller quantities.

Not all of Golden Key’s customers have a direct tie to Russia and Eastern Europe. Students from Sullivan University’s culinary program are regular visitors, along with local educators teaching classes on geography and social studies.

A tiered display sits just by the register, small candies wrapped in a rainbow of colors. “Teachers love these because they are inexpensive and come straight from Russia,” shares Safarova.

Without a doubt, though, the meat counter always sees the most action. One of the most popular items amongst the cured meat delicacies is pure pork fat, which is consumed in a way one might not expect. “We call it Russian sushi—you cut off a thin piece of the pork fat, place it on a slice of dark bread and eat it straight, followed by a shot of vodka,” says Safarova. “It’s a favorite.” 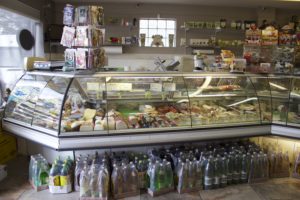 With 20 hard earned years behind them, Safarova and Gold don’t plan to slow down anytime soon. On the contrary, if you cross through a door set along the back wall you will enter a cozy, open room, ideal for a small restaurant and entertainment space.

In the not so distant future, Golden Key will be home to a restaurant specializing in dishes from Central and Eastern Europe—think schnitzel, goulash, and the like. A small platform was in the midst of being built during my visit, setting the stage for lounge singers. Safarova is herself a singer and will be the regular act once the doors to Golden Key’s restaurant open.

Safarova and Gold asked me to return sooner rather than later, a request I will be happy to oblige. Indeed, Golden Key is a small yet formidable feast for the senses and their 20-year tenure in Louisville’s Buechel neighborhood is worthy of celebration.