Brand building—it’s what Bridget McCauley knows and loves. For 17 years, the Highlands resident worked in corporate marketing on bourbon brands such as Makers Mark and Four Roses. When she wasn’t promoting other brands, she often thought about starting her own.

“I love the whole idea of building a brand, telling a story, and creating one-on-one relationships with consumers. It was my favorite part of marketing with bourbon brands,” says McCauley.

During a serendipitous moment while she was on vacation with family and friends the idea for a new brand came to life. The fleeting moment occurred so quickly that it almost escaped her, had her friends not acknowledged it. They were sitting around, talking, laughing—and eating. Her mother served the group some warm, freshly baked bread. Sourdough bread.

Friends, Holly and JK McKnight, were the first to make the suggestion. “You should sell this. It’s amazing,” McCauley remembers them saying.

She knew the bread was good, after all her family enjoyed it for years, but good enough to sell?

The Story Behind the Bread

The sourdough bread recipe hailed from McCauley’s grandfather, Robert Goodman. Goodman was an entrepreneur himself, as he owned a real estate and investment company located downtown on 5th and Market St.

Goodman, his wife, Doris, and their eight children lived in the Hikes Lane area. As McCauley describes it, the Goodman kids were a milk-drinking, catholic-school-going bunch who enjoyed spending time with their 25-plus first cousins and 40-some second cousins.

“One of my earlier memories of my grandfather is that he had this huge garden at his house where he would go to decompress,” says McCauley. “He grew the most amazing food. My grandmother would pickle it. My grandparents always entertained and shared what they had. Food was always the focal point of our gatherings.”

After McCauley’s grandparents passed away, McCauley’s mother, Susan Gasper, took over the bread baking duties. Cousins would come over and ask “Aunt Susan, do you have some of your bread?”

Gasper wanted to teach McCauley the family recipe, but it wasn’t until after McCauley married her husband, Eric, and became a mother of two children that she developed an interest in learning.

“I started to wonder why does all of my mom’s food taste so good,” McCauley jokes.

The mother-daughter duo went to work baking bread and sharing their bounty whenever they could.

A Brand is Born

Having a good product to sell is only one piece of the brand-building puzzle. McCauley knew this. Her brand needed a name. Calling the product Aunt Susan’s Sourdough was a no-brainer. “That’s what the brand has always been to me,” she says.

It wasn’t enough to leverage her own story, she needed to speak with other successful brand makers. She reached out to former colleagues and people she admired who owned their own businesses.

“Her creativity and passion as well as having a solid business plan set herself up for success. She contacted the right people beforehand and dotted her I’s and crossed her T’s,” says Laura Petry, Director of Marketing at Brown-Forman, who met McCauley seven years ago through work and has remained her friend.

She spent nine months designing packaging. She developed a word board of what Aunt Susan’s is and isn’t, and wrote a strategic plan.

First, she shared commercial kitchen space in NuLu with Maggie Hoy, owner, Sweets by Mille. In August, she moved into a bigger commercial kitchen on Brook St. in Old Louisville, sharing the space with Turnip the Beet, a culinary and pastry arts school for children.

“The arrangement works perfectly because they have classes in the evenings and on weekends, which is the exact opposite of my schedule,” McCauley says.

She baked some more, narrowing in on her flavor profile. Aunt Susan’s Sourdough comes in Original Sourdough, Cinnamon, and Onion Dill. She introduced a seasonal pumpkin bread and mini-slider buns this fall. 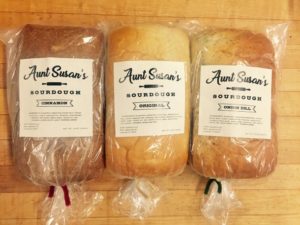 A successful brand won’t grow without customers. The best outlet for building a following, she found, was through local farmers markets.

“Farmers markets were always an integral part of my plan,” McCauley says. “Having worked in the bourbon industry and as the face of a brand, I understood that getting consumers to taste a product and tell a story builds a following. Farmers markets offer the opportunity to tell consumers the story, hand them the product, and share that one-on-one connection.

“The first thing they ask is, ‘Are you Susan?’ and I can share, ‘My mother is Susan, and this is her dad’s recipe. I’m a third-generation family member making this recipe.’”

McCauley capitalized on her farmers market footprint, decorating her booth with antique linen cloths and photos. Just by a quick glance, a consumer could tell the brand’s story.

The local connection became another reason why McCauley wanted to showcase her product at various farmers markets. “All farmers market products are handmade and Kentucky Proud. Everyone knows that. This validates you to that great group of people. Also, many farmers markets take EBT and SNP. We can share the product with people who don’t always have the opportunity to buy fresh food,” she says.

Aunt Susan’s Sourdough had booths at the Schnitzelburg Community Farmer Market and Phoenix Hill Farmers Market. She was also a guest vendor at the Douglass Loop Farmers Market. “They try not to have too many people sell the same product so when they don’t have their main bread vendor I can fill in,” says McCauley.

Meanwhile, McCauley worked in tandem to get her product into retail operations. The positive of retail, McCauley explains, is that some Saturdays people can’t make it to farmer’s market.

“For a new brand you don’t want to only have your product available at one point of a person,” she says.

McCauley was tenacious about contacting the buyer for Paul’s Fruit Market. “Paul’s was so gracious,” she says. “Once they tasted the product they said ‘we’ll bring it in and be the first. Our customer base will like it.’”

In addition, to Paul’s, Aunt Susan’s Sourdough retails at Valu Market in the Highlands and Bluegrass Exchange Marketplace & Deli in Norton Commons.

“We had been offering samples of the bread for a few days before we sold it. Then on the first day, we sold out,” says Brian Sur, Founder & CFO, Bluegrass Management Group, which operates Bluegrass Exchange Marketplace & Deli. The Norton Commons neighborhood grocery store opened this past September.

“We can’t keep the pumpkin on the shelve. It’s been selling out every week,” adds Chad Zanger, Founder & CEO, Bluegrass Management Group.

The bread is also featured on the Deli’s specialty sandwiches. “You can just tell by the weight of the bread it’s a solid loaf. We’re excited to have it and help her sell it. Hopefully, she can keep up with us,” says Sur.

Keeping up with orders, McCauley recognizes, is a good problem to have. If that means waking up at 4 a.m. to begin baking at 5 a.m., that’s okay.

“You can’t be afraid of hard work to do this,” says McCauley. “I make every single product. I manage production, delivery, sales, distribution and all of the paperwork. I love it because it’s mine.”

She credits her husband, Eric, and parents for support. “Collectively as a family we work together. It takes a village and I’m utilizing every member of my village,” she says.

In addition, McCauley networks with other female business owners and is participating in the NAWBO Grow program, which offers women business owners support, resources and opportunities to propel their businesses forward.

She advises budding entrepreneurs to tap into their personal networks. “I don’t know everything. I don’t pretend to” she says. “Look at the people around you and gain perspective. I couldn’t do this without networking,” she says.

Barry Younkie, Beverage Alcohol Sales Manager, MGP Ingredients, Inc., isn’t surprised by McCauley’s success. He’s known McCauley for 20 years and calls her the brains behind much of the marketing at Maker’s Mark.

“Maker’s Mark would be a cheap bourbon if Bridget hadn’t been brilliant in carrying the brand to thirsty consumers,” says Younkie. “She was the brightest candidate for a job at Maker’s Mark and personally built Maker’s Mark in half of the USA—from being completely unknown to being on the very back bar. She grew as a thinker, a builder and a supporter of people. She’s always been a leader.”

Brown-Forman’s Petry agrees. “Once she sets her mind to something she makes it happen, it’s her personality,” she says.

Long-term, McCauley hopes that Aunt Susan’s Sourdough becomes a regional household name. For now, the pride of caring on a family story is enough.

“My mom and dad are proud of me,” McCauley says. “My mom loves that I’m carrying on a family tradition. Several aunts say that my grandfather would be proud of me, too. It feels good.”