Since 2014, cyclist Drew Echelberger has recorded more than 26,583.8 miles, almost 2,000 miles more than the circumference of the Earth, on his bicycle. It’s all part of his sightseeing mission to see the United States. Echelberger has ridden through heat soaked plains, against mighty headwinds, enduring forest fires, flash floods, swamps, mountain passes, and treacherous terrain. He has suffered mechanical failure, fatigue, dog attacks, and debit card problems. He sleeps each night in a different place, on the couch of a new friend, or tucked away in the ephemera of the country, baseball dugouts, firehouses, churches, summer camps, garages, or more. And it started on stage.

An emcee, Echelberger grew up around hip-hop and R&B producer, Dr. Dundiff, developing his talents with a mic, while his friend evolved his production style. Dundiff (aka Roman Aprile), and Echelberger started off auspiciously enough, fooling around with beats and rhymes in basements around the city. Slowly, as their respective musical talents developed, Dundiff, Echelberger, and their friends formed the Smoke Shop Kids, the premiere live hip-hop band in Louisville.

“I had thoroughly burnt out on academia and fallen in love with cycling. I was trying to figure out a way to make my dreams a reality and avoid a traditional job. In a very vivid moment of clarity, out there in the crowd on the great lawn at Forecastle, I remembered turning to Roman and saying ‘I’m gonna ride my bike across the country’ he looked me square in the eye and responded with ‘next year we’re gonna be on that stage,’” says Echelberger. 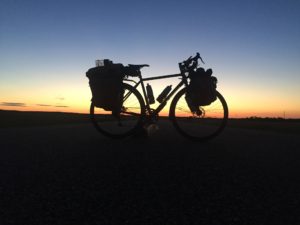 That moment changed his life forever. “I had never been so motivated or passionate about anything before in my life,” he continues. “Over those next 91/2 months, I worked around the clock at two jobs for six days a week saving and training, investing and planning for the leap of a lifetime.”

His dream was to ride from Louisville to Pacific coast Canada, from Canada to Mexico, from coast to the gulf down to the keys up the east coast and then back home.

“At the same time I was training for what was expected to be a 15,000-mile bicycle tour, Roman was making huge strides musically both independently and with the band,” says Echelberger.

They both went for it. Echelberger got to work saving money and endurance training, riding his bike throughout town. Post-high school, he worked at a host of odd jobs, from restaurant positions to running food for Jimmy Johns, a position that allowed him to continue to practice.

Concurrent to that, Aprile hustled to convince the powers that be at the Forecastle Festival to consider Dr. Dundiff & Friends, a collaboration between Dundiff, the Smoke Shop Kids, and a wide array of local hip-hop talent, to get the big stage at the upcoming music festival. 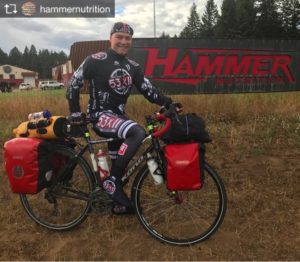 I Rode Here on My Bike

Echelberger’s love affair with cycling started off easy enough, pedaling around the neighborhood with friends, party cruising around town at his leisure. That interest evolved to include mountain biking, but after a slight injury, he switched to road biking. It started off small, with short in-town destinations, punctuated by his work as a courier, before developing into longer, intra-city rides. He dusted off his father’s 1987 Peugeot Tourmalet 12-speed road bike and took it into Parkside Bikes for repairs.

His first substantial trip out of the state was during the summer that Dr. Dundiff and Friends were scheduled to play Forecastle. Determined to return to Louisville before the show and with enough time for his girlfriend’s birthday, Echelberger traveled from just outside of Washington D.C. to Louisville in seven, daunting, tiring days, meeting his goal just 25 minutes before his scheduled arrival time. He coasted from there.

“It was one of the most rewarding moments of my entire life, I haven’t gotten married, and I haven’t had a kid, so nothing has yet to top it,” says Echelberger. “My plan was to then head northwest and continue on the route I had originally intended upon, however, at that point I had run out of money and was just tired and homesick, so I began serving tables in hopes to save up enough to finish what I set out to do.”

On the Road Again

Echelberger took great care to ensure the comfort of his bicycle, packing lightly with spare clothes, repair tools, and bedding for camping, along with provisions. Long stretches on the road lead to tedium, both of the mind and body, and he has learned to adapt accordingly, taking strides to make sure that his cycle has regular maintenance and is as easy as possible to ride, to help fight fatigue. Dusting off his emcee skills, he often pens verses on long rides, taking efforts to document them to his phone when he can, but more often than not losing them to time and chalking it up to time well spent. 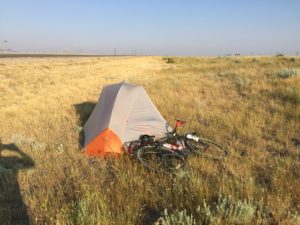 Life in the Lanes

He faced near tragedy on a stop recently in the Minneapolis, St. Paul area. While stopping for a drink at a microbrewery for a short reprieve, someone stole his bike, effectively stranding him in the area. Echelberger took to the internet locating a local board for bicycling in the area and reported his bike stolen along with a story of his travels. Fortunately, a good Samaritan came to his rescue.

“Two hours later somebody commented, ‘Yo, dude just bought your bike for 60 bucks.’ I went across town two miles away to the other brewery to retrieve my bike and give him 60 bucks, and to buy him and all his friends a round of beers.”

His story landed him some brief local celebrity on the local news, which picked up his story. Following that story, the man that found his bike came to realize that the two may have something a little extra in common than he’d originally thought.

“Three months later I get a message from the guy saying he met my great Aunt Rita at a family reunion and turns out he is my blood fourth cousin,” says Echelberger.

For Echelberger, everyone dies, but not everyone lives. That’s his mantra for putting one foot in front of the other, enduring weather extremes and environmental dangers, trading comfort for experience.

Syd is a freelance writer and musician. He co-runs the Louisville Music and Culture blog Never Nervous, and has contributed to The LEO Weekly, Louisville Magazine, The Courier Journal, WFPL, and the Voice Tribune. You can follow Syd on twitter @ttaurisb and find samples of his work at sydbishop.com.
SHARE ON FACEBOOK
SHARE ON TWITTER
EMAIL TO A FRIEND