There is something wonderfully overwhelming about Viet Hoa Food Market (7100 Preston Hwy.). The sheer footprint of the space is impressive, not to mention the tens of thousands of items that fill the shelves dividing this Asian food paradise. If you are looking for a hard to find ingredient indigenous to Chinese, Japanese, or Southeast Asian cuisine, chances are Viet Hoa will have not one but three variations of what you seek.

Such selection was not always available in Louisville, a fact that Zou Xiong found to be quite an inconvenience when he moved from China to Louisville in 1997. Zou Xiong, who goes by Joe, was first a restaurateur, opening several Chinese restaurants in the city. As his businesses succeeded, he was increasingly frustrated by the lack of access to ingredients from his homeland. He decided to take matters into his own hands, opening Viet Hoa in 2004.

A Store to Get Lost In

Situated in between the All Peddlers thrift store and Family Dollar on Preston Highway, Viet Hoa is located close to where Fern Valley Road meets Preston and less than five miles from I65. The proximity to this major interstate and thoroughfare is what drew Joe to the location, as a large percentage of Viet Hoa’s customer base is from out of town. Joe wanted to make sure visiting Viet Hoa was easy, working to combat the same inconveniences he had experienced as a restaurant owner.

Even if a visit to Viet Hoa may be a short drive away, one should plan on spending an ample amount of time getting lost amongst the vibrantly colored fresh fruits and vegetables, the sauce aisle that seems to go on for miles, and, best of all, the seafood counter. Customers are greeted first by the produce section, crates of fresh, golden-orange persimmons and massive, pebble-skinned jackfruit sit at the head of the space. All variety of tuber and roots are present, including yucca, taro, malanga, and every color yam under the sun. Bananas are also in abundance, Thai, burro, plantain, and baby bananas sit adjacent to a multitude of coconuts. Aloe, cabbages, and herbs sit in a cooler along a far wall, leading down an aisle that becomes increasingly more interesting as the selection slowly transitions from fresh fruits and vegetables, to quail and duck eggs, to an area stocked with crates boasting premium jellyfish, salted seaweed, and pickled leeks.

A quick turn and you will find yourself in a new aisle, plastic bags holding every kind of dried mushroom one could hope for papering one side, sacks of flour— from tapioca to glutinous rice. Further along there is an entire area dedicated to baking needs along with an enormous assortment of noodles, preserved turkey meat and dried ground pork.

A Favorite of Chefs

Select goods from South America make an appearance in the store as well, however, the emphasis of Viet Hoa’s inventory is on those ingredients used across the many cuisines of Asia. It is easy to see why this market appeals to the local chefs Joe says make regular appearances in the aisles.

Undoubtedly, these chefs won’t leave without a visit to the very back of the store where the meat and seafood section lies. Indeed the compilation of ingredients amassed in this area is what sets Viet Hoa apart from other groceries.

Long open freezer cases are filled with, among other things, fish balls crafted with cuttlefish, milkfish, or stuffed with roe and balls made with beef tendon, which you may recognize from your favorite Vietnamese beef pho. Tubes of headcheese and thinly sliced beef, ideal for Korean BBQ, are also on hand, in addition to both frog legs and whole frogs, the spots on their skin showing through the packaging. Large crickets and silkworms are frozen as well, and there is an entire area dedicated to all things offal for those looking to craft specific, authentic dishes. Unsurprisingly, it is the meat and seafood selection that draws the most business, and Joe even offers live blue crab in addition to a tank of fresh fish like live bass and catfish.

From shrimp to abalone to octopus to black chicken and squab, Joe’s determination to ensure Louisvillians have access to any and all ingredients used in Asian cooking has been nothing short of comprehensive, so much so that his success has led him to open two additional locations.

There are now three Viet Hoa markets, the second opened in Indianapolis in 2013, and the third set to welcome customers very soon in Greenwood, Indiana. Joe’s time is split between all locations and he has high hopes to continue growing his business, and his mission to make the flavors of Asia accessible to all being accomplished, one new location at a time. 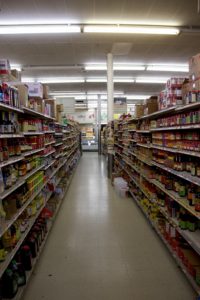