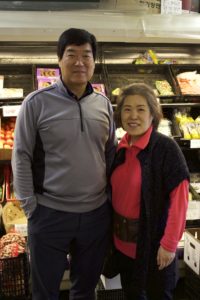 In my quest to discover the many international groceries rooted in our city I have found that, more often than not, the business is a family affair; Choi’s Asian Food Market (607 Lyndon Ln.) in Lyndon is no exception.

I was welcomed to this expansive market, specializing in goods from across Asia, by Jongin Choi, the son of proprietors Hyun Sook Yoo and Young Gyu Choi. Jongin and his parents moved to Louisville from a small town outside of Seoul, South Korea, in 1999. Their dream of owning their own business propelled them to travel halfway around the world, their sights set firmly on Louisville.

Mr. Choi’s brother and his family had previously settled in the city, having attended the Louisville Seminary School. Jongin, who has spent over half his life in Kentucky, says he and his family love their adopted hometown and knew that Lyndon would be the ideal neighborhood to make their visions of a food market come to life.

While Choi’s Asian Food Market has been a staple of the Lyndon neighborhood for 14 years, the business did hold a different address at the outset. Without a solid location available in Lyndon, the Choi’s opened a small home goods shop in Middletown, offering various kitchen sundries along with movies with Korean subtitles.

One year later they would find that the long, squat building sitting just off the corner of New La Grange Rd. and Lyndon Lane was available, offering the ideal space for them to grow into. Given that many Korean-Americans live in Lyndon and the surrounding area, the Choi’s jumped at the opportunity to set up shop in a place they knew their offerings would be the highest demand.

Fast forward to 2017 and a glimpse of the market’s original life as a home goods store can be found in a back corner of the shop where the shelves are filled with bamboo mats and steamer baskets, woks, tea kettles, colorful bowls, and chopstick sets sold in bulk and in training form for kids.

From this vantage point, the shop spills out into long aisles stocked with frozen, packaged, and fresh produce popular throughout Asia. Jongin estimates that 60 percent of the store’s inventory is dedicated to Korean goods, the remaining 40 percent primarily focused on provisions from Japan and China, a smaller selection of ingredients from Vietnam, Thailand, and the Philippines are also on hand.

Their offerings have developed based on their customer base. Items are added to the shelves often at the request of a loyal customer in search of a specific ingredient. And if they happen to be in search of instant noodles they are in luck. Choi’s Asian Food Market boasts an impressive collection of prepackaged ramen, this section of the store is the most popular, according to Jongin. Jongin is particularly discerning when it comes to the noodles he eats, and he personally prefers the Shin Ramyun Noodle Soup.

Around the corner from the array of noodle soup is the produce section, where locally sourced fresh eggs are available in addition to staples across many Asian cuisines including Napa cabbage, radish, and a selection of mushrooms. Chayote were a somewhat surprising find, this green, winter-squash-like vegetable is native to Mexico. Jongin shared that they began offering chayote as their customers like to include it in stir frys.

If you are on the hunt for a specific type of rice or noodle, chances are Choi’s will have you covered. Several local chefs frequent the market for the purposes of buying these items in bulk. Jongin and his parents also make sure to keep pork belly available at all times. This prized cut is offered in various sized slices, ideal for making Korean BBQ. Housemade crocks of kimchi and all of the quintessential banchan dishes, traditionally served with any Korean feast, are on hand as well. 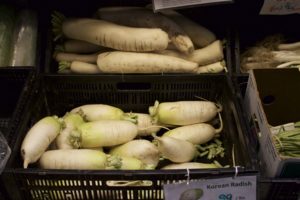 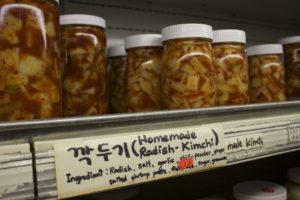 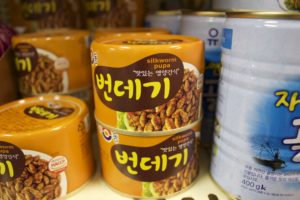 When I ask Jongin to show me some of the items that tend to fly under everyday shoppers’ radars he chuckles and leads me to small tins of silkworm larvae. Toasted and tossed in a fiery spice blend, these little bugs are a popular snack when drinking beer.

For the less adventurous eater, kimbap— rice rolls stuffed with various fillings—and to-go containers of the ever popular bibimbap dish are available in a small display at the register. Made in-house daily, these snacks are known to sell out quickly.

I said my goodbyes to the Choi family and departed resolved to return, visions of dishes from afar filling my mind along with a deep appreciation to the Choi family for making these ingredients and flavors available for all to experience.