Jackie Floyd is easily the heart and soul of West Louisville’s Russell neighborhood.

“Jackie is Russell,” says Tom Stephens, Executive Director, Center for Neighborhoods, a nonprofit that strengthens neighborhoods by equipping community leaders and partners in the work of improving quality of life.

Floyd joined the staff of the Center for Neighborhoods last January as a Neighborhood Liason, serving neighborhoods in Metro Council Districts 4, 5, 7, 16, and 17. Prior, she served with New Directions Housing Corporation as a Vision Russell Outreach Worker leading community outreach and input efforts with the Vision Russell Choice Neighborhoods Planning grant.

Floyd had an idea: Russell Walks. She describes it as a “Fit-Bit-tennis-shoes-eyes-on-the-street-see-your-neighbors-again program.”

Those people who know Floyd were not surprised by the idea. Floyd is an avid walker. Walking along the streets of Russell made sense to her. She’ll happily share her walks with anyone interested in joining her. It’s one of her favorite things to do, walk people around Russell and show people “Her Russell.”

During her walks, she greets everyone she passes on the street like an old friend. Does she know everyone’s name? “Oh no,” she laughs. “I can never remember names. But faces. I always remember a face.”

Bounded by West Market Street and Broadway from Ninth to 32nd streets, Russell was once considered “Louisville’s Harlem.” African American theaters, restaurants, and nightclubs lined the streets. In 1908, America’s first public library opened to African-Americans, the Western Branch of the Louisville Free Public Library in Russell.

However, after WWII many middle-class families left for neighborhoods in the city’s south and east ends. By the 1960s much of the area’s business districts were razed and public housing units built.

Floyd notes how many businesses have come and gone in Russell, but the barber shops and beauty salons have remained. She has a simple reason for that. “If you want to know what’s going on you go to a barbershop. That’s how you find out who got married and who got in trouble,” she says.

Master Barber Eric Hansberry, has owned the New T&B Classic Barber Shop on 18th and W. Muhammad Ali for ten years. The barber shop has been around since 1961. “This is a meeting place. It’s a comfortable place to chat,” Hansberry says.

Hansberry has noticed positive changes in the neighborhood, especially an influx of more black-owned neighborhood businesses. “Ninety percent of the turnaround has been for the good,” he says.

However, Russell still has work to do when it comes to dispelling misconceptions about the neighborhood.

“People think the further west you go the worst it is,” says Hansberry. “I want people to know that they would enjoy themselves just as much at our black-owned businesses here as they would at Bardstown Rd.”

Case in point, Sweet Peaches (1800 W Muhammad Ali Blvd.), the quintessential neighborhood restaurant is located around the corner from Hansberry’s barbershop. Chef/Owner, Pamela Haines, opened her small café in 2014, providing fresh comfort and soul food dishes. You can’t miss it. Just head towards the “There’s Love in Louisville” mural on the outside brick wall.

Hansberry swears by Sweet Peaches chicken and dumpling. “My second favorite thing on the menu is the fried potatoes,” he says.

To Floyd, Russell is about “Family, community and trying to survive.” Businesses such as Sweet Peaches emulate this. “Even if you only have $2-$3 you’ll still go to Sweet Peaches to support her,” says Floyd.

Turn down Muhammad Ali at 19th Street, and you’ll notice a shaded area with picnic tables. This unnamed spot is where locals go and “shoot the breeze,” says Floyd. “They stop by before work and after work. My dad used to go to a similar place.”

These touchstones lend themselves to a community that cares, a community with constant conversation.

Walk back towards Muhammad Ali Blvd. at 19th Street and you’ll spot the former location of Jay’s Cafeteria, which is now Chef Space. “Jay’s was always packed. It’s where you would hang out to find out what was going on,” recalls Floyd.

Floyd sees it as a nice addition. “Community Ventures is so welcome to the community. The food at Chef Space is delicious. Many people in the community get food there after church,” she says.

Floyd wishes more local businesses could assimilate into the community, like Chef Space. Bridging that gap is something Floyd thrives on.

She tells this story: “There is a gas station on 17th and Broadway that people go to all the time. They buy their bread and knick-knacks there. One day, I said to the owner, ‘You got to do more.’”

Floyd began hanging up flyers for the Russell Community Association in the gas station, but that was just the start.

“I told the owner that was not enough. He needs to come to the meeting. He said he’d come to the next one,” she says.

The Russell Neighborhood Association is Floyd’s passion. During a recent walk through the area, Floyd points out doors she’s knocked on to invite people to association meetings.

She calls herself the “organizer” although there’s no doubt she’s spearheading the group. Her first meeting had 30-35 attendees.

This Neighborhood Association is different from typical associations that may be meeting about updating Home Association bylaws or dog barking ordinances.

“We’re not addressing concerns,” says Floyd. “We’re here to see if we like each other. First, we got to get to know our neighbors. We don’t want to be a Neighborhood Association of yesteryear.”

She invites city officials to speak and get updates on developments. She wants to make sure the west side and east side of Russell don’t feel divided. She also wants to dispel the myth that renters don’t care about neighborhoods. “I’m a renter, and I care,” she says.

What the neighborhood needs, says Floyd, is mom-and-pop stores. Think corner stores to buy simple necessities. “I have a car. I can drive to Kroger. What about a senior citizen who can’t?” asks Floyd. 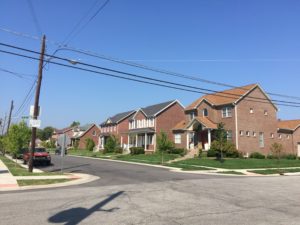 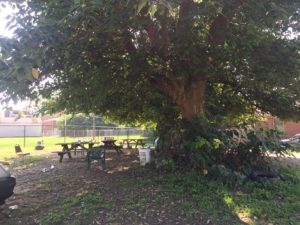 Floyd soon may get her wish. After decades of challenges, Russell is primed for revitalization. The U.S. Department of Housing and Urban Development (HUD) announced a $29.5 million implementation grant through the U.S. HUD’s Choice Neighborhoods Initiative program. The federal funding will help implement Vision Russell, a comprehensive transformation plan for the neighborhood, starting with a phased deconstruction and redevelopment of the Beecher Terrace public housing site. (Vision Russell was developed over the past two years by Louisville Metro Government, the Louisville Metro Housing Authority (LMHA) and community residents, agencies and leaders.)

Part of the grant’s funds will also be used to develop a Russell Arts and Cultural District, down Muhammad Ali Boulevard from Sixth Street to 21st Street.

Other area changes include a forthcoming state-of-the-art multi-sports complex anchored by an indoor track and field facility on the 24-acre Heritage West property located at 3029 W. Muhammad Ali Blvd. being developed by the Louisville Urban League.

Passport Health Plan intends to build a new headquarters and healthcare campus in Russell this April.

“I’m looking forward to the revitalization planned,” says Barbershop owner Hansberry. “It’s bringing people together, which is what the world needs more of now.”

Likewise, Floyd continues bringing the people of Russell together one neighborhood walk or neighborhood association meeting at a time.

If work wasn’t enough to keep her busy, Floyd, 64, has five children, 12 grandchildren, and four great-children. She has survived cancer, the deaths of her husband, mother and sister, the incarceration of her son and is now raising her 14-year-old grandson, who is in her custody.

Floyd doesn’t mind the challenges of managing her family and job responsibilities. After all, Russell is her family, too.

“I’m still doing my little part,” she says. “I see greatness in this community. I’m the type of person, I’m hopeful,” she says. 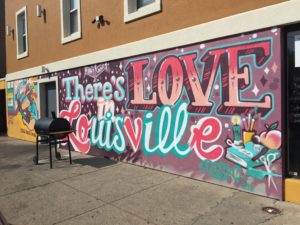